I thought I’d kick off the details of the deli quest by describing our experience at the “Deli Kasbah”. It’s been several months since I “enjoyed” this experience, but some things just stick with you for a while, including the meal itself.

I note from their website that they are now known as just “Kasbah”-this is probably just as well, because it was less a deli and more a full-serve restaurant. And by “full-serve”, I mean that our waiter was as warm as Mickey Goldmill or Clint Eastwood in “Gran Torino”.

This could have been one of the stranger dining experiences ever. First, the place is located in a basement at 251 WEST 85th Street NY, NY-to get there, you go down two steps, physically, and socially. Second, they have flat panel TVs all around the restaurant. In your normal place, they’d be showing a football or baseball game. At the Deli Kasbah, where the owners apparently belong to the Chabad movement, they are showing propaganda films of the Lubavitcher Rabbi lecturing throngs of people about the coming of the Messiah. You can only imagine the scene; this film was just like the ones you see from Germany in the 30s, except there’s the late Rabbi pounding his fist on a podium. The sound was turned down, but I could only imagine him yelling “you, eating the corned beef…what’s the matter with you? Why haven’t you called your mother? Wear a sweater, it’s cold out. Where’s your hat? Try the chicken soup…Donate money...” It was very disconcerting. 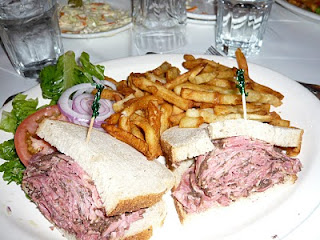 The food was ok, but if you check the menu, you can see it’s more regular meals than deli. I did get pastrami, which was better than average, but not great. Other people got a Middle Eastern plate with hummus and a variety of meat dishes. 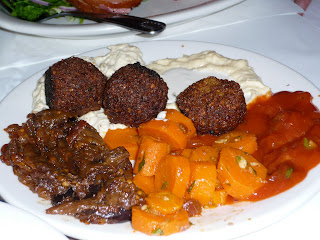 In addition to the usual deli sandwiches, they have some uniquely named meals. There’s “Yoseph’s Dream Steak” where apparently, instead of interpreting dreams about the baker and butler, he’s dreaming about a “Tender center cut rib eye steak, sliced and marinated by our chef in a red wine and mushroom sauce "Joey's Special" Eric says-that’s great, as long as “Joey” doesn’t mean “baby kangaroo”. There’s also “King Moshiach’s Rib Steak”, described as “a 22 oz. rib steak with a HUGE bone, served with red wine sauce” (emphasis theirs). The bone is so HUGE, it’s really 4 ounces of meat and 18 ounces of bone, for a mere $44.95. For that price, the Rebbe should cut it up and serve it to you.

The food was fine, but this was not a particularly good example of a NY deli. Next…
Posted by Eric Weinstein at 10:06 PM

Not at all...read my post from December 19, where I sing the praises of Noah's Ark's "stuffed knish."

I hope that's not your sandwich. If so, your arteries are hating you. Take a break from meat and the like before I send you to Dr. Oz.