You scream, I scream, we all scream for ice cream 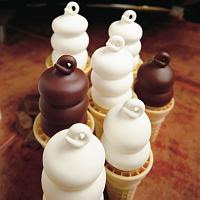 So goes our family chant (and a lot of other families’, I’m sure) when I was growing up. Given New England’s reputation as the highest consumers of ice cream in the United States, as well as my mother’s reputation as an ice scream connoisseur, I knew the latest quest, was right up my alley (and a few other places). With an ice cream truck jingle playing in my head, I embarked on Cream Quest 2011.

As I said on the radio last week, of all the quests, this one brought back some of the fondest memories, but abused my system in ways I didn’t imagine. I think I actually turned lactose-intolerant after all this consumption; my body just basically said “no mas”…Ice cream was the Sugar Ray Leonard to my Roberto Duran.

Prior to my total system collapse, I was waxing poetic and romanticizing ice cream. Ice cream is really the “food of love”. Most of us took dates out for ice cream-my first date with Mrs. Palate ended at TCBY in Brockton. What Annette Funicello/Frankie Avalon movie didn’t have a scene from a malt shoppe? Everyone loves going out for ice cream. In fact, Baskin-Robbin’s 32nd flavor was called “4-play”-it had a lot of nuts in it. Wasn’t a big hit though.

Talking about ice cream brings out the Union v. Confederacy in everyone. It’s a modern-day Gettysburg. Vanilla vs. Chocolate, soft-serve vs. hard packed, rainbow vs. chocolate sprinkles, cake cone vs. sugar…the list could go on and on. I have friends that have ice cream shipped from all over the country, on dry ice, for special occasions, and I have friends that drive over two hours just to sample the wares at an ice cream joint in another state. Ice cream is important to us, and nothing says summer more than ice cream.

During the Cream Quest, I did come to realize that eating ice cream isn’t just enjoying the cone itself, but also the environment. I believe that the flavor is enhanced by the experience. Eating ice cream in a shopping plaza parking lot (from Friendly’s) is not quite as nice as having a freshly scooped cone and sitting harbor side in Rockport (Rockin’ Cupcakes). Sometimes it’s the environment, and sometime it’s the company, but without further ado, here is the list (with commentary) of most of the places whose cones I licked.


A frequent stop for me always is Dairy Queen (Everywhere). This is an after-orthodontist treat for the kids. While it’s nothing special, you know what you’re going to get. Doesn’t matter if you’re in North Conway, New Hampshire or Houston, Texas…a vanilla cone with butterscotch dip tastes the same. Good or bad? You’ll have to decide yourself.

(photo courtesy of the Boston Globe)

Friendly’s (Everywhere)-really the same as DQ. It may not be as scrumpdillyicious as DQ, but it is follows the national corporate model-make sure it’s the same no matter which location you visit. Growing up, I lived within walking distance of a Friendly’s. In fact, instead of working at my father’s diner, my parents wanted me to work at the Friendly’s…I think so my dad could walk down and grab a “Jim Dandy”. Alas, I was more suited for the diner grillwork than jerking a soda or scooping ice cream.

As you faithful readers know, I love Coneheads in Woodstock, NH. It’s the bomb! Love the 24 flavors of soft-serve, which are perfectly blended in, not swirled, and high-end homemade hard-pack. Everything there is a party in your mouth…you can’t go wrong with having your ice cream scooped by Beldar, and you don’t have to go to Remulak for it!

Leavitt’s (Atkinson NH)-This is a tiny little shop in he middle of nowhere in Atkinson, NH. We discovered it years ago at camp visiting day. Other friends really enjoy it as well. They serve Richardson’s ice cream, and have premium soft-serve.

Dairy Joy (Weston, MA)- Every year when the Boston Globe runs their own ice cream review, they always feature Dairy Joy in Weston. This stand harkens back to a simpler, agrarian time in that area, and it still has that authentic, farmland feel, especially with the Range Rovers, Volvos and Jaguars. I could look beyond all that if the ice cream was any good…it’s not. The soft-serve has a weird after-taste, their ordering system is a failure, and so I didn’t even try the hard-pack. Don’t waste your time.

Honey Pot Hill (Stow, MA)-nothing says fall in New England than the premier apple orchard selling vanilla soft-serve. A surprise, for sure. I said to Mrs. Palate that “this is what Vanilla soft-serve should taste like.” The taste was great, but it had a grainy texture, and it was a poorly formed cone. Droopy, lop-sided and messy. Otherwise, great. I suspect they’ll work out the kinks, and soon enough, it’ll be a nice addition to cider donuts.

Rockin’ Cupcakes (Rockport, MA)-ice cream is hidden in this cupcake bakery, and there are a bunch of places to choose from along Bearskin Neck, but I like this one and they sell Richie’s Slushes in a variety of sizes. It’s almost at the water’s edge, and there’s something very pleasant about grabbing a cone, and a seat at the water, and watching the tide roll in and out. Just watch out for the seagulls.

Ted Drewes Frozen Custard (St. Louis, MO)-your arteries will never be the same. Rich, creamy…killer! You can get custard (an entirely different sort of texture) at Abbot’s in Needham. If you like it thick, creamy and dreamy, you’ll like these custard stands.

Truly Yogurt (Wellesley, MA)-one of my favorite places. High quality frozen yogurt up the street from the Dana Hall school and Wellesley College. Great price to value ratio in a town not known for low prices.

JP Licks (Newton)-over-priced and unimpressive. Built on a reputation that is not all that well deserved. I like the Brookline location well enough, but Newton and Wellesley…feh!

Trombetta’s Creamery (Marlboro , MA): nice selection of home-made flavors, Richie’s slushes and soft-serve, though the soft-serve uses a flavor syrup that swirls around the edges of the ice cream, as opposed to being mixed in like at Conehead’s. While I prefer the thoroughly mixed-in, I just enjoy my soft-serve fix at Trombetta’s. My mother hires them to bring their ice cream truck to her offices throughout the summer, and they know she loves her “purple cow” frozen yogurt. They’ve been around a long time, and have a solid reputation and well-deserved following.


Amy’s (Austin, TX)-as I wrote back in April, nothing finishes a bbq meal, or Chinese food, like ice cream. Amy’s is the “Steve’s” of Austin. Sure, they too have a variety of pretenders, but for icy, creamy goodness, run, don’t walk, to Amy’s, even if it is in Austin. Also, my vote for coolest website animation.

Lizzy’s (Waltham, MA)-I like Lizzy’s. It’s not a place that you’ll drive 20 miles for, but if you’re in Waltham, it’s a good place to stop. They make their own “tofutti” style ice cream, good for the lactose intolerant, and they do a great off-site sundae party. Full disclosure-we’ve used them twice for parties, and they have been fantastically easy to work with, and always perform as promised. Each party was a big hit, and their ice cream is pretty, pretty good too.

Uhlman’s-weird after-taste. I tried several flavors an each one had a strange taste left behind. I know some people who love this place (hi Mom!), but as for me, I’d rather get a cone at MacDonald’s. 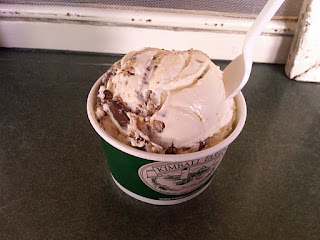 Kimball’s (Westford, and other locations)-This is the Disney World of ice cream. They have a million flavors, the scoopers pile on the ice cream, a phenomenal price to value ratio (my kiddie size was bigger than most places “large” and it was $2.49!!!). They have a pitch and putt golf course, mini-golf, bumper boats, a country store, a sandwich stand…ice cream as a destination. And by the way, the chocolate-peanut butter ice cream was the best I ever had, and all the family palates agree!