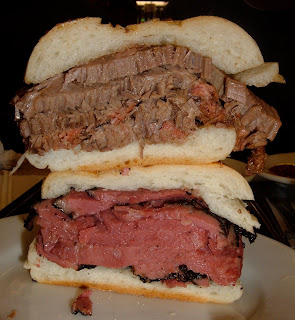 As I waddle from deli to deli, I’ve come to the realization that you ask five people where to find a good deli, and you get 10 opinions, and those opinions won’t even agree on what makes a deli. Having been to many places, I have particular images that are conjourned when I hear the word deli.

About 15 years ago, a colleague invited me to meet him for lunch; he said that he had just discovered a new “deli” in my town, and wanted to grab a sandwich; he told me he’d pick me up in 10 minutes. I hop in the car, and he tells me it’s up the street. I have lived in the MetroWest my whole life, pretty much, and I know every place, and I hadn’t sniffed out a new deli, especially one right on Route 30 in Framingham, but I’ll play along. So he drives us over to the Lechmere Mall, and takes me to “Makkas Pizza”. I said to him “Dude, this is a pizza joint.” He says “yeah, but they have good sandwiches.” Well, that ain’t no deli.

That incident always reminds me how we all have different views of things. To my friend, who hails from the south, any sandwich shop I guess qualifies as a deli. I suppose he would think that “Subway” or “D’Angelo’s” qualifies. I suppose some people think a deli is any place that can produce deli-meat sandwiches, in which case “Store 24” or your local Shell Gas Mart qualify. Now that’s good eatin’.

As an aside, this is not to say that you can’t buy good deli meat at a deli counter in a market. I am particularly fond of the hot pastrami (out of a steam table) at The Crown Market in West Hartford, CT or the corned beef at Larry Levine’s in Peabody, MA (in addition to the corned beef, they sell the most sublime Hebrew National Natural Casing Hot Dogs…).

As I said in an earlier post: “One thing that I have observed over the years is the differing ideas of what really make a “deli”. To me, with my heritage, I expect a massive menu of over-stuffed sandwiches, as well as other traditional sides (such as knishes, kasha, and kishke). The ambiance is completed by pickles in jars, salamis and other netted meats hanging from the ceiling, and sweaty old men in filthy, formerly white aprons, cutting the meat and swearing under their breath in Yiddish.” Mostly, it means feeling a little guilty you’ve eaten some of this stuff, and knowing you shouldn’t be doing this on an every day basis.

I have discovered that there is a dearth of delis in the Metro Boston area…even Boston itself doesn’t have that many. In addition to the few I’ve already posted about, I have eaten at six others. As my arteries clear, I have begun my reviews. In tomorrow and Saturday’s posts, in anticipation of my appearance on WBZ 1030AM Saturday night at midnight on the “Jordan Rich Show”, I will share my thoughts with you on the local deli scene, as well as my favorite.

For now, enjoy some stuffed derma…it’ll get you right in the “kishkes”…
Posted by Eric Weinstein at 9:04 PM