Five Guys, Smashburger, Tasty Burger, Mr. Bartley’s…the list of great burger joints goes on and on, even if some are national chains.  But with all the hype, it took me about a year to get to Shake Shack; I thought it was going to be like when “Cold Stone Creamery” came to town, claiming that they invented the “mix-in”.  Or “Quiznos” for that matter, claiming they invented the “toasted sub”.  Uh, ever hear of “Famous Pizza”?  It really galls me when these out-of-towners come on in, invading our territory, claiming that they’ve developed/perfected things we’ve been doing here in Massachusetts since the Pilgrims landed on Plymouth Rock!

Well, I took my sweet time getting to Shake Shack in Chestnut Hill, and I have to ask myself: Self, what took you so long?  Finally, a place that lived up to its own hype, at least as far as the burgers are concerned.

Like Five Guys and other burger joints, the choices are limited.  Check out the menu here.  Burgers, hot dogs, fries and shakes…really the core of the burger joints menus.  While some places offer a million toppings piled on, Shake Shack has a limited number of choices, but extremely well-executed.  Burgers are served fresh and hot, with extremely colorful fresh lettuce and tomato.  Added bonus:  crinkle cut fries.  Sure, I like the natural cut, skin on, Idaho russets served at Five Guys, but the crinkle cut fry harkens me back to a simpler time, filled with fried goodness, and no cholesterol issues. 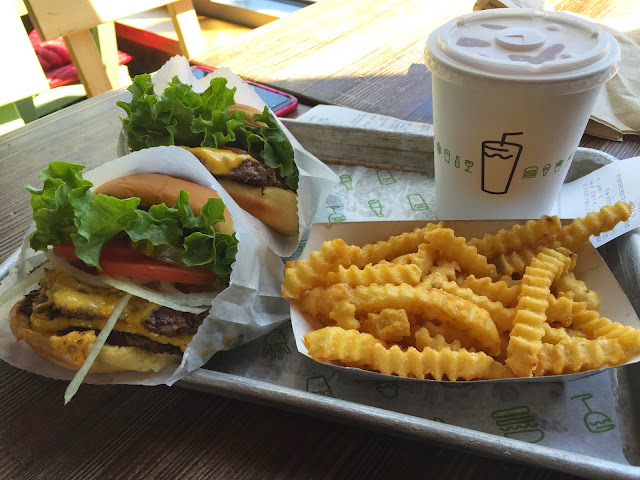 There are four locations in Massachusetts:  Harvard Square, Chestnut Hill, Newbury Street and Dedham.  I’ve been to Chestnut Hill, and past both Harvard Square and Dedham, and the places always seem to be busy.  With an interesting mix of industrial steel and wood interior, it’s comfortable, but crowded.  With a lot of seating, it still seems to be packed, no matter when I go.  Apparently, people are shaking it down to the Shack.

Because this is not the healthiest way to eat, I suggest you reserve your visit for when you really need the burger fix.  Once in a while, everyone (except Mrs. Palate and Sister Palate) needs a burger.  Do yourself a favor and give Shake Shack a try.