As a society, we fill arenas in the winter to watch grown men run up and down a basketball court or skate across the ice. In summer, we fill the stands at baseball games and cheer wildly when someone hit a homerun. We fill stadiums every Sunday in the fall to cheer giant, HgH-enhanced men playing football. Announcers use expressions like “battles”, players are “gladiators” and players themselves talk about playing a game in terms like “going to war.” A little hyperbole anyone?

On this Memorial Day, let’s take a moment to remember the real heroes. Most of these men and women were never cheered in stadiums, most aren’t even known to you and me. Their numbers exceed a million, and we live under the blanket of freedom they provided. Today is the day we need to remember those men and women who served our country and gave the ultimate sacrifice to provide us the freedoms we enjoy: the freedom to speak out against, or in favor, of our government, to practice whichever religion we choose, and to work and enjoy our lives without constant governmental scrutiny. 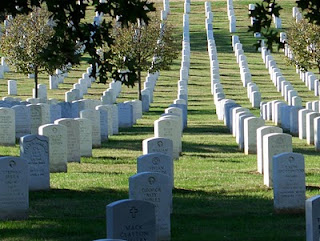 Though it’s not Veterans’ Day, let’s also remember and thank who fought for our freedom in the fields, to those that liberated camps, to those that went to Southeast Asia, worked in the Natick Labs developing new technologies for the armed forces and space program, and to those that serve currently in the Middle East and elsewhere. Despite your personal feelings about the actions themselves, remember there were people willing to fight for you, and die for you.

And now, back to the NBA championship series.
Posted by Eric Weinstein at 12:25 PM

thank you for appreciating what i did .....
senior palate

Very nice shout out. You want the truth, you can't handle the truth!

Son, we live in a world that has walls.
And those walls have to be guarded by men with guns. Who's gonna do it? You? You, Lt. Weinberg? I have a greater responsibility than you can possibly fathom. You weep for Santiago and you curse the marines. You have that luxury.
You have the luxury of not knowing what I know: That Santiago's death, while tragic, probably saved lives. And my existence, while grotesque and incomprehensible to you, saves lives.