Caution, the photos you are about to see may be real, and delicious... 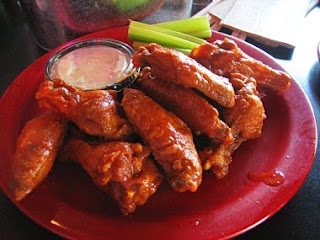 In addition to the Burrito Battle, I also embarked on a sister-quest: Wing Whirlwind…in my mind, you can’t go wrong washing down burritos with some deep-fried buffalo wings.

My methodology for wings was a little different than for burritos. I will discuss and compare wings from wherever consumed. The process for making wings is the same whether at a sit-down restaurant or a barroom-you take chicken wings, fry them, sauce them, and serve them. Takes the same time and basically follows the same procedure. No place was disqualified.

There are a couple of camps for wings…drumettes vs. flats, breaded vs. plain, bone-in vs. boneless, blue cheese vs. ranch. I visited a boneless chicken farm in Pennsylvania once, and it wasn’t pretty...poor little bastards.

I like both the drummies and the flats, and I like them without breading…au naturale, if you will. And I like it on the bone. The boneless “wing” is really the ugly stepchild of bar food. Too many places, almost all on my list, use a breaded boneless cutlet that has been flattened to almost non-existance, and coated in a thick crumb coasting…pretty much right off the Sysco truck. The exception-the Chicken Bone in Framingham which uses a fresh hunk of chicken that they hand-bread.

The buffalo wing battle for supremacy could go on all day and night. It seems that everywhere thet sell appetizers there is some version of a chicken wing. Having eaten hundreds of wings for you, hungry readers, I can honestly say, unlike burritos, that could eat hundreds more. There is something tasty, yet unfilling, with wings. I could eat them until the boneless chickens come home.

Without further ado, here is a list of places where I ate buffalo wings, with comments (of course)…

Uno’s-this place always surprises me in that these franchises can pull off their food as well as they do. Uno’s has different burgers and the usual pub food, as you all know, but they have a very pleasant wing. The offer a “Wing 3-Way” (I suppose a rooster’s dream come true), but in reality, it’s nine buffalo wings with a choice of three wings with 3 sauces each. I usually just stick with the buffalo sauce, but recently tried some with buffalo-garlic romano. Delish, but stand back.

Acapulcos is a Mexican restaurant chain with locations all over Massachusetts. They serve a wing for an appetizer, which is quite substantial an order, but I wouldn’t call them buffalo wings. The wings are heavily breaded, no sauce, and fired to a crispy brown. They are tasty, and very crunchy, but without sauce, it’s just fried chicken.

British Beer Company-not terrible, but not impressive for a place that bills itself as a pub. What better pub food is there than a buffalo wing. At a place like this, the wing better be very good, but here they are just ok, but not very large or meaty.

Truants in Woodstock, NH. This is a barroom’s bar, with a dining room in the lower level. The wings were ok, but not excellent. As my son says, a bar has to know how to do wings, and if there’s anyone who should know about barrooms, it’s a 14 and a half year old boy.

Common Man in Lincoln, NH, with other locations statewide. We ate dinner in the pub that night. The pub was a great environment…unlimited cheese and crackers, sitting on couches or easy chairs. There is a giant stone fireplace in the pub, and I can imagine that during the winter, a roaring fire where they can have virgin sacrifices. Besides home-made potato chips, all I ate were wings and these were great wings…meaty, fresh...highly recomended.

Moat Mountain in North Conway, NH. As you readers of my earlier posts know, I love the Moat Mountain Smokehouse. I always have a decent meal there, and these wings did not dissapoint. They were excellent, especially the spicy honey chipotle version 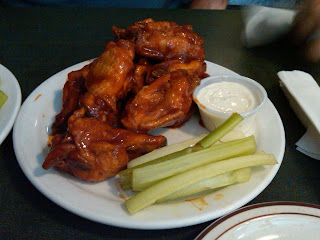 Buff’s Pub in Newton Corner, Massachusetts. This place has the reputation of the Anchor Bar in Buffalo. Any buffalo wing train has to stop at the Buff’s Pub station. I can tell you that the wings did not dissapoint-the wings were hot, meaty, and covered in finger-licking goodness. Unfortunately, while close to the top of the wing food chain, the “boneless” wing was a pedestrian processed cutlet off the back of a food service delivery truck. Buff’s Pub was “almost, but not quite”.

Firefly’s with multiple locations locally. Any regular reader or listener knows that I am not a fan of their food. Their bbq is blasé’, to say the least, but they do make a nice wing. The wings are not fried, nor served buffalo style, but they are humongous…like Chernobyl Chicken wings. They are smoked, then grilled a little to char them up. Served with buffalo sauce (and other sauces from the condiment bar) I give these high marks, though the rest of the menu isn’t executed nearly as well.

Whole Paycheck-though their burritos are nearly perfect, their wings on the food bar are terrible. Wings on a steam table are impossible to keep hot or remotely fresh…I say walk on by.

Speaking of walking by, I urge you never to order the wings at the Union Street Bar and Grill, Newton Centre. Without a doubt, the worst wings I had during this quest. The were very slow to come out of the kitchen, and even though they were ordered as an appetizer, they came out after all the other food hit the table. They looked good, and they appeared hot, but one bite, and looks were very deceiving. The skin was rubbery, and the flavor had an off-putting taste. I offered them around the table of 8 other hungry people, and everyone declined. Not a good sign. They were so bad that I posted on Facebook my warning about these from the table, with picture. Their other food might be good (and I say “might”, because I also had to return my salad since I had ordered it without the hair “garnish”). It was a bad day overall for Union Street. 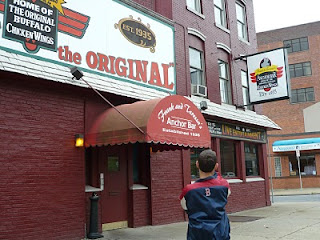 Almost like going to the Western Wall in Jerusalem, no trip to the buffalo wing holy land could be complete without a trip to the Anchor Bar in Buffalo, NY. I almost got chills as we walked in, but that could have been because it was August and they had the air conditioning on…For me, eating at the Anchor Bar was almost as cool as meeting Thurgood Marshall, since the both had a lasting impact on America, in their own ways. 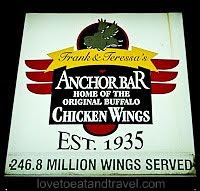 The Archor Bar claims to be the inventor of the Buffalo wing. Since they are located in Buffalo, I have to give them credit for being the first place in Buffalo to sauce their wings, but you can’t tell me no one ever thought of putting sauce on a piece of fried chicken before 1964??? Nevertheless, I have no complaints about the Anchor Bar wings-hot, meaty, saucy, and the “original”.

The leads us to the two other joints local to me. I reveiewed these a few years back, before I went on the “Wing Wander”. I found that nothing had changed, and the earlier comments still apply. I offer you an edited version of that post tomorrow…
Posted by Eric Weinstein at 9:49 PM

How could you do wings and not go to the Bone?

Uhhhh, did you read the last paragraph? Coming later today, Wings vs. the Bone...

Although not possible in this Wing Whirlwind, I recommend a bar in Baltimore known as the Camden Pub, a block from Maryland Shock
Trauma Center. They serve chicken wings fried without batter in butter and Old Bay seasoning. They are unusual and sensational. They are the most popular wings served in this pub, even with the old standards available on the menu.