In the battle of Man vs. Burrito, Burrito won

While I entertain you with a variety of burritos...warning, these are actual photos of burritos consumed during this research...

So, by the time I rounded the turn for the home stretch (and resulting stretch marks…) in the Burrito Battle, I was huffing and puffing to the finish line. In the battle of Man vs. Burrito, Burrito won. But of course, the carb coma didn’t stop me from sampling the wares of several popular places, and a few not so popular ones.

Both Boloco and Chipotle are within a 5 minute drive from my office. For a long time, Boloco was the only burrito game in town, and for a long time, I was primarily a Boloco fan; I was loco for the burrit-o. The nice thing about Boloco was they have different sizes, and whole wheat tortillas as opposed to just white flour tortillas. Also, with an extensive menu, you really had millions of choices. However, when Chipotle opened within walking distance of Boloco, a few things became immediately apparent.

First, more menu choices means more chances for mistakes. As I have previously noted, the more choices, the more room for error. The more I ate at Boloco, the more issues I had. Consistency became an issue. While I liked the perceived healthier options (wheat tortilla and brown rice), sometimes I wondered what I ordered, and whether I ordered a small or a large. At Chipotle, choices are limited, and they don’t give you any choices for brown rice or tortillas, but their speed and ability to make the burritos consistently is a by-product of their limited choices. It’s a business plan decision, but one that seems to work well for Chipotle. 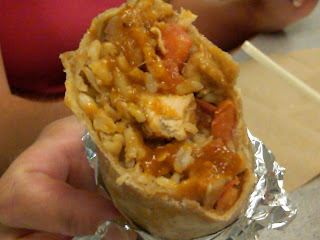 Second, some things aren’t meant to be in a burrito. Variety is the “spice of life”, but I have to imagine they don’t eat a lot of “thai peanut chicken” in a whole wheat tortilla in Bangkok. Buffalo chicken with blue cheese and celery just doesn’t make it for me, or probably people in Buffalo.

I do give Boloco high marks for their sense of humor, their creative email updates, and their tremendously responsive customer service, including rapid personalized responses from their CEO. I downgrade them for their lousy selection of bagged tortilla chips.

I give Chipotle decent marks for their chips, which are cooked fresh on-site, and their lime-salt added to them. I like the bigger pieces of chicken, and that you can order off-menu items like quesadillas. 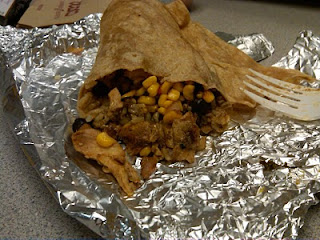 But, the winner was not one of the burrito specialty shops. Not a little bodega with a burrito lunch business. The winner, after dozens of burritos, is exactly where you would have expected: Whole Foods supermarket.

That’s right, “Whole Paycheck” has the freshest, most delicious burritos, custom made fresh to order.

I was shocked myself, so much so, that I went back a second time to ensure it wasn’t a fluke; it was not. There are several tortilla choices, different rice (white or borwn), beans (black or pinto), salsas, fresh vegetables and toppings. Since Whole Paycheck is known for their freshness (as well as their prices), it was a particular surprise that a full sized burrito costs only $4.99, a better deal that any of the burrito places. Adding to the value is that since the burrito bar is slightly under-patronized, the employees take a reasonable amount of time making the burrito, getting you out promptly, but assembling the belly bomb in the appropriately balanced fashion. Just take a look at the photo, with the proper balance of rice, beans, meat, veggies…this is a work of art. 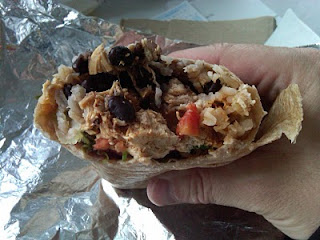 After months of burrito sampling, the winner and top of the burrito food pyramid…Whole Foods.

I do believe this is the first time I’ve said this after a food quest-if I ever have another burrito, it will be too soon.

For your consideration, I leave you with this image: a salami stuffed with a meat, cheese and bean burrito, all wrapped in bacon. I call it "Salburcon"...one picture says a million coronaries. 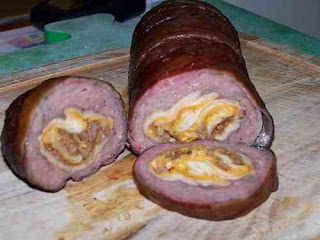 Great post. Wish we were on the winning side of things, but alas, the burrito wars will outlast the Afghanistan conflict...

I'll give Whole Foods a try again. I had tried the one in Dedham (Legacy Place) and came away disappointed, but despite the fact that I started and run a chain of inspired burrito restaurants does not mean that I, like so many, am not in perpetual search of the world's greatest burritos (which of course gives me incentive to continue creating such things on our own, as well!)

As for the Bangkok and Buffalo, and especially the latter, regardless of where they might or might not eat them, there are absolute diehards for those and every other "non-Mexican" option on our menu. Certainly not every menu item is for every stomach... never will be... but those have both been no our menu since 1997 and 1999, respectively, because there would be a riot of thousands if we dared take them off ;)

Last but not least, i've been humming that darned Almonds Joy commercial since i read your post yesterday. Any thoughts on how to get it out of my head??! :)

PS. You'll more than likely be hearing from someone on our team (Sara or Sam). Writing posts like this about Boloco is like winning a Wonka Chocolate ticket... one day you'll be back in burrito mode, and we're a determined bunch... Boloco needs to be your #1 destination! :)

John-thanks for the great post and contribution to the blog.

Keep up the good work, but evaluate the chips.

I do like your pro-environment message...I should have mentioned this.

Got the email about Late November-now that's a combination! I may need to go out of my comfort zone...

John-I might suggest the theme to the "Brady Bunch" or "KARS for KIDS" to help get rid of "Almond Joy".

Give Whole Foods a try. The ones in Framingham and Cambridge did them right...

Late November is good. Many love it, I personally "like" it, but my go-to is the Buffalo Steak.