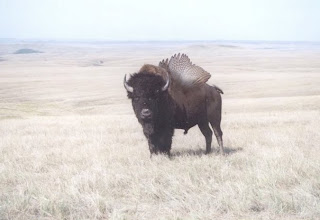 So, to round out the wing wanderings, I went back to both "Wings Over...", a multi-location franchise, and "The Chicken Bone Saloon", a local joint in Framingham. What follows is mostly a re-print of my review from last year, since not much has changed, and my findings remain the same.

You can find out more about the “Wings Over…” franchise at their website. Since it began in Amherst, MA (long after my departure), I should be inclined to like it. Back when I was stalking the mean streets of Amherst (with some brass knuckles and a sock filled with a few rolls of quarters), the only choice was “Wings Express”, which was down a small alley behind the stores on North Pleasant Street, just around the corner from that bastion of fine Mexican dining…Taco Villa!

The “ambiance” of ‘Wings Over…” is like the ambiance of an airline hanger. Convenient, since they somehow try to confusingly incorporate an airplane theme. It is very industrial, and the Framingham location, located in an old car dealership, is mostly take-out with extremely limited seating. Thankfully, we employed the patented “stand over the people and make them uncomfortable” technique. However, I’ve seen fraternity house kitchen tables after a toga party that were cleaner…I felt bad for the girl working clean-up. 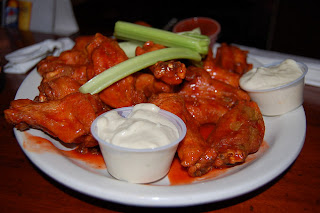 The few times I’ve been, I’ve ordered the “Cajun Blackened” and the “buffalo”. The Cajun is a dry-spiced wing, as opposed to the sopping wet wings you get at most places. The cajun wings were fried, then re-spiced and grilled over a flame, I think. There was a good ratio, 50/50 of “flats” or “wings” to “drummies”; they were tasty and meaty, and I give them good marks. Other than the limited seating, I recommend “Wings Over….” I also liked the buffalo sauce, but I admit I’m not rushing back, but mostly because there’s so little seating.

While still holding on to fresh memories of Wings Over Framingham (and probably the wings themselves), I was enticed to go to The Chicken Bone Saloon (aka “The Bone”), less than a mile from “Wings Over…”. The Bone has been there for years…I remember going there once, when I felt tougher. It’s in an area of Framingham that is literally “on the other side of the tracks” and if you went, you went down two steps, physically, and socially (I know, I beat this joke to death). Glad to say, while still a bar room, it is much more family-friendly, and becoming so popular that they’ve opened a second seasonal location right near Fenway Park ( and now closed…apparently, not as popular as I thought). Check out The Bone here! 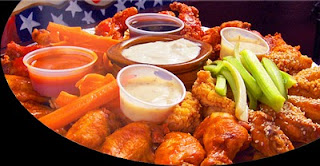 The Bone has a very extensive menu…reminding me a bit of the Anchor Bar, both in choices, and décor. After much consideration, I ordered the “garlic hot” (which is traditional hot Buffalo sauce with added garlic) with a side of “thermonuclear”; Sterling got boneless wings with traditional hot Buffalo. With nervous anticipation, we opened the to-go cartons, and were duly impressed. The aroma was sublime and they were still scorching hot and fresh. First impressions: these really held up well in take-out containers, and they were very appetizing looking. Second impressions: very meaty and fresh. What was especially impressive was that the skin was still crisp even though they were doused in sauce-that can be hard trick to pull off, and they did it well.

To be the champ, you gotta beat the champ…locals who claimed the Bone was on to something were right, “The Bone” wins, in quality of packaging, crispness after saucing, quantity of veggies, and menu choices. That’s not to say that “Wings Over…” isn’t good-they are, but even with a tie in wing quality, the tie has to be broken with the veggies, packaging, etc...

Honorable mention- Sichuan Gourmet with locations in Billerica, Framingham and Brookline. You can’t think of a fried chicken wing without thinking about Chinese food. The ubiquitous wing has been part of Americanized Chinese Food since Marco Polo brought pasta to Italy…Sichuan Gourmet has taken that wing to a new level.

Sichuan is the place to go if you like traditional Sichuan cuisine, which basically means “spicy”. While they offer regular wings on the menu, they also offer the mysteriously named “Spicy Fried Chicken Wings”. We’ve been ordering these ever since Sichuan opened, and they are fantastic. These are entirely different from a Buffalo wing. They are fried, then tossed in a garlic-chili oil, then garnished with hot green peppers and scallions. Wow, absolutely delcious, but like an inferno in your mouth. Do not eat these if you have a canker sore, or had dental work, but when you eat them, the endorphins do take over.

No doubt, my mother has stopped reading this by now. But if she happens to still be reading at this point, don’t worry, my next food venture is into salads (yeah, right!).

Now go out and eat some wings.
Posted by Eric Weinstein at 9:09 PM