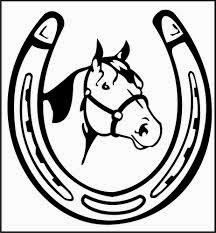 We have come to the point where when a restaurant actually delivers on what it promises, I get excited.  Finally, in a little corner of the world, there are places that restore your faith in restaurant humanity.  Witness, the Horseshoe Pub in that bastion of fine dining…Hudson, Massachusetts.

Everyone knows what to expect at a “pub”…beers and burgers, or something like that.  When I go to a place like this, I’m not going to order the sushi special, because that certainly will be “special”; you have to stay in the place’s wheelhouse.  Order a beer, get some wings, grab a burger, and enjoy.  In today’s world, though, sometimes you still have to hope for the best, but expect the worst.  Thankfully, the Horseshoe Pub delivered…in spades!

The Horseshoe Pub is located on a side street in downtown Hudson…you almost need to know someone who can tell where to find this place.  However, once you do, you’ll find plenty of free parking.

My meal started with a double order of “double baked” Buffalo wings.  “Double baked” is a bit of a misnomer-we asked the waitress, and she explained that the wings are flash-fried, then coated in the choice of sauce, then baked to cook the flavor into the wings; conclusion-evil genius!  Without a doubt, these could rank as my second favorite wings (the spicy wings at Sichuan Gourmet could still be in the lead, but it’s close).  I’ve had wings at all the big places, including the Anchor Bar in Buffalo, NY, but baking in the oven, roasting the flavor right into the wings, brought these meaty wings to an entirely new level…I am salivating just writing this.

Everyone has some food they crave…some like sweets/chocolate/candy, others, like me, crave salty foods.  Every now and then, some food passes across a person’s plate and like a siren’s song, calls their name-these tantalizing little wings keep calling me back to Hudson!  It’s like crystal meth on a chicken bone!  Thankfully, my teeth won’t rot from these. 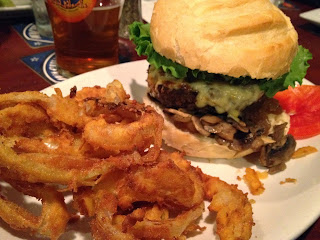 After the wings, I washed it down with a half-pound cheeseburger, with mushrooms and sautéed onions with American cheese and a side of onion rings (my mother’s phone call to lecture me comes in 5, 4, 3, 2…).  The burger was ample, cooked perfectly, and had a nice balance of the additional toppings.  My only complaint, and it minor, is that the roll the burger is served on was a common, Sysco roll.  I can find that roll in just about any other place.  I might suggest an onion roll, or a fresh bulkie roll, but I’m not marking them down for this…the roll was fine, just common.

What really grabbed me on this were the onion rings.  Just about every pub tells you they serve “hand cut” onion rings.  What they don’t tell you is that the cutting is done in some warehouse and by “hand”, they mean a machine operated by someone’s hand.  It’s the same with “hand cut French fries”.  Mostly that means someone putting a potato into some sort of press, and pulling a lever.  Sure, the lever is operated by hand, but if you think there’s some guy with a sharp knife meticulously cutting potatoes, or onions…well…

But while these onions rings may have been cut somewhere else, there was some onion voodoo going on in the kitchen, just without the chicken blood.  These rings were not your common breaded rings…they had a texture and taste that was just plain exceptional.  And, like the “Matt Garrett’s” of old, reminded me in some ways of the “onion loaf” the way they were stuck together and had to be pulled/cut apart.

For those of you unfamiliar, “Matt Garrett’s” was a small local chain that hit it’s stride in the early 80s in the Greater Boston area, with locations, among others, in Sudbury, Brookline, Brockton…one of their featured appetizers was the “onion loaf”.  A greater, and more deadly, food invention there never was, except for the “Bloomin’ Onion”.  It was basically a brick-sized and shaped fried onion loaf and it weighed about as much as a brick too!  It was so ridiculously dense that you couldn’t really pull it apart until the end…when it was delivered to the table, you needed to slice it with a serrated knife!  Basically, fried onion loaf slices!!!  I’m thinking they should have used these slices in place of sandwich bread, and stuffed some meat in between.  Can you imagine…a burger served between two onion loaf slices!?!?!?  OMG, I am starting to sweat just thinking about eating this.  But, for one brief moment last night, the onion rings at the Horseshoe Pub brought me back…and gave me chest pains.  Onion rings never hurt so good.

BTW, the salads looked good too.

Now I know that even a blind chicken gets some grain now and then, and places can be “on” or “off” on any given night (as “yelp.com” will surely inform), but I am happy that I was there on an “on” night, and I look forward to adding this to my select group of places to where I’ll return, if they execute the second experience as well as the first.  For now, I encourage you all to try and find this place.  The décor is nothing special, the location is totally off the beaten path, and the food is not fancy.  But it was well prepared, well executed, and well received.  Go forth, into the land, and eat!