Must Not See TV 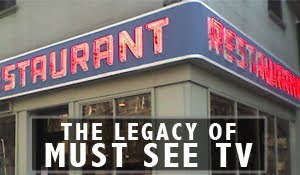 As I get ready to depart on some Palate field work, I've been wonder: whatever happened to “Must See TV”, the classic NBC advertising campaign back in the 90s? We were urged to tune in to NBC on Thursday nights and we could sense that we were watching real classics in the making. Whether it was the Cheers, Seinfeld, Wings, Friends or Mad About You, it was practically appointment television.

Back then, if you might not be home, you had to learn how to split the atom and program your vcr to “tape” these shows, and watch them some other time. Now, most people I know have a DVR or TIVO, which has made missing shows a non-issue. You can DVR the higher-quality shows and watch them at your leisure, leaving the networks to fill all the rest of the empty time, hoping to grab your attention. As a result, I think the combination of cable and TIVO have caused the dearth of quality TV.

Back in the day, there were only 3 networks and a handful of cable stations. Most of the cable entries were HBO, Cinemax and the like, ESPN and CNN with Headline News. Having cable tv really meant that you got a static free signal and didn’t have to worry about adjusting rabbit ears…it did not mean an offering of a garbage meant to makes your eyes and ears bleed.

Sadly, I think that is the current state of television today. At “Palate Palace”, we have the “Dish Network” and subscribe to “America’s Top 200” with our local channels. As I have written before, what this really offers me is 200 channels of nothingness…the non-fat, decaf skim lattes of television (might as well order a cup of air). Sometimes I feel I’m better off watching a blank screen. 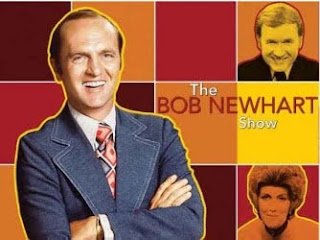 For those of you willing to take a chance with your brain cells, feel free to tune into Nickelodeon. Back when cable was fresh, “Nick at Nite” was the repository for “The Mary Tyler Moore Show” or “The Bob Newhart Show”; you could also catch episodes of “The Odd Couple” and other classics. As cable grew and the channel line-up expanded, and Nickelodeon and Disney expanded from 1 channel to 118, the need for new programming became paramount. There are only so many repeats of the old shows people will watch, and certainly younger viewers weren’t tuning in for repeats of “The Patti Duke Show”. So, along comes “Ned’s Declassified School Survival Guide”, “Zoey 101” and “Big Time Rush” (a brief digression-I am not sure there has ever been a worse show than “Big Time Rush”. A derivative rip-off of the all-time “classic” “The Monkees”, except without talent and without humor, and without the LSD-inspired bump-ins and bump-outs. Closing in fast in “Ned’s Declassified…” and “Zoey 101”) Spend time watching this junk and you might need professional help.

The more channels, the greater need to fill the air. So instead of high quality writing and acting, these stations dump the classics and instead we get “Victorious, “True Jackson, VP” and “Shake it Up”. I dare you people to watch these shows.

I purposely left “Drake and Josh” and “ICarly” off the list. These shows border on “pretty ok”, as their comedy can be slightly subversive and attractive to both kids and adults. The producer, Dan Schneider, also produces “Zoey 101” and “Victorious”, proving the adage that even a blind chicken gets some grain now and then.

Overall, the simple economic theory of supply and demand has created a black hole of creativity in the development and execution of television. The more available television space, the greater the need to fill with “original” programming, the greater the likelihood that less skilled writers and creators will get a chance to put up shows like “Ned’s Declassified School Survival Guide”. I’m not sure I can “survive” that much more…
Posted by Eric Weinstein at 10:04 AM

You've always watched too much tv. Even though your mother swears you learned everything from Sesame Street.

She demanded that we get "cable" in Centerville so I could watch Sesame Street. It's her fault.

I don't think they had cable back then.