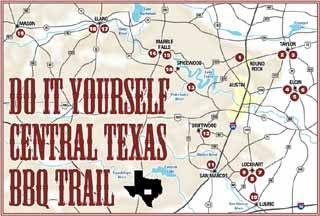 It was a noontime arrival on a warm afternoon. The wind buffeted the plane violently as we came in for a landing, but when I walked in to the terminal, I wanted to kiss the ground; not in thanks for the safe landing, but in thanks for my arrival at the barbecue Mecca known as Austin, Texas. It was “game on”.

Last weekend was Marty and Eric’s Excellent BBQ Binge Fest, brought about by a mutual viewing of “Man v. Food” and Adam Richman’s visit to the Salt Lick BBQ in Driftwood, a farm about 20 miles outside of the Austin City Limits. For context, Marty was my roommate from my freshman year in college at Northeastern, before I journeyed westward to Amherst, and we’ve remained close for 27 years. On this trip, we not only survived, we thrived, and can now tell the tales of our weekend in Austin, and no, it won’t read like a letter to “Penthouse Forum”.

There’s a lot to tell…too much for one blog post. So, I think I’ll go day by day. We crammed a lot in on this trip, on the odometer of our car and in our colons. 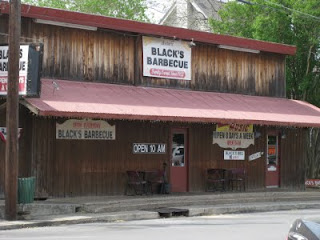 As soon as we left the airport, it was time for a quick 30 mile drive to Lockhart, TX, the literal barbecue capitol to Texas, as named by the Texas State Legislature. Our first destination was “Black’s”…don’t know why, but there was something pulling us in. We passed “Kreuz Market”, a destination for the next day, and turned right down a dusty side road and pulled right up to the front door of “Black’s”. When we opened the front door, the sweet and pungent odor of smoke hit us in the face like a velvet glove. It was both a slap, and a caress, and we knew that we were about to experience something sublime. 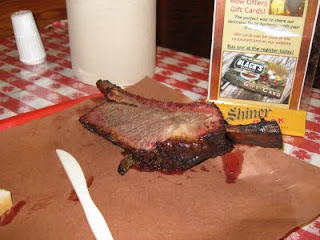 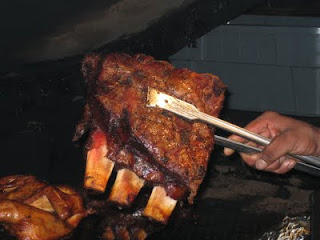 Eating at Black’s was like having sushi in Japan, kimchi in South Korea, a croissant in Paris, schwarma in Jerusalem or coffee at the Pike Place Market in Seattle. It was a transcendent moment; one that almost cannot be described but must be experienced. 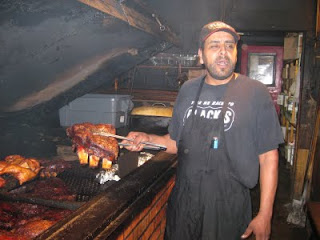 On a whim, after we ate, we asked if we could get a tour of the “pit”, or for the uninitiated, the smoker. The pit-master could not have been nicer, taking us back into the smoke room/kitchen, explaining his whole process, the temperature, the different meats and times, and the wood used to impart the sublime essence.

It was a great end, to the great beginning; I said to Marty as we walked out, if I didn’t have any more barbecue the rest of the weekend, I was all-right.

As the slogan on the t-shirt says: “Take me back to Black’s”. Right now.
Posted by Eric Weinstein at 11:07 PM

An order of those ribs should be called "the Flintsones"