Thanks to all you readers who tuned in to hear me on “The Jordan Rich Show”. As always, Jordan is the consummate host and makes me sound much better than I really am…

Marching in the “Pasta Parade 2010” was almost like the Bataan Death March…hot, sweaty and lots of chafing-at least in my mind, and waistline. Actually, it wasn’t too bad, even for someone like me who doesn’t eat a lot of tomato sauce. 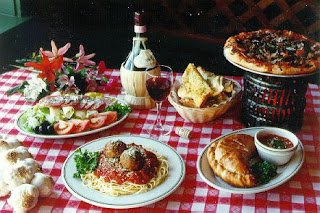 Unlike my Asian quest, I did not eat the same thing at each location. Though I ate at a few “local” joints, I also ate at several “chains” since several of you were imploring me to do so, and those places are very popular with the American dining public.

What follows is a list with my commentary about each location…

Il Forno in Westborough, challenging “Vinny T’s” for the most use of garlic. I love Northern Italian cuisine-lots of herbs, garlic, olive oil and wine. Maybe a cream sauce or two. We went to Il Forno without any pre-conceived notions, and it was packed when we arrived-always a good sign. The food was good, and especially heavy on the garlic (that stayed with me for several days). Fair warning-low ceilings and really close tables..so close, I wasn’t really sure that it was “my” garlic I was smelling, or even tasting. Because of the low ceilings, it’s noisy and you can participate in other people’s conversations at the other tables, which I enjoy, even if the other people don’t. A few locations around the periphery of Worcester County. I give it a fork up.

Macaroni Grill-better choice than the Olive Garden, but then again, what isn’t? Macaroni Grill is really growing, and after years of seeing them all around Florida, they’re creeping into Massachusetts. The menu is similar to the OG, with décor and the essence maybe a half-step up the food chain. The two times we ate there, we had really excellent service, and the most recent time, we were with a large group and almost all the food came out right, hot and fresh. The kitchen is wide open, so I give them credit for showing you if their product comes from a boil-in bag. They did have an especially pleasant appetizer: Mediterranean Olives: “Handpicked olives from regional farms in Italy. Marinated with extra virgin olive oil, orange zest and roasted red peppers”. I also enjoyed the Pollo Limone Rustica, which, according to the menu is slow-roasted chicken sautéed with imported penne pasta, lemon-basil cream sauce and fresh spinach, then baked until golden brown. It’s not terrible. The Palate gives it a “tongue up”. 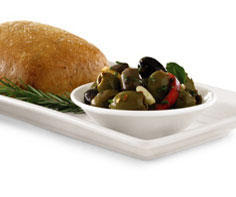 Bella Costa in Framingham-nice family-owned single location place with some traditional and non-traditional dishes. Had the Chicken Putanesca, which had garlic, olives and capers…frankly, a perfect combination of savory elements for me. This was my top pick. Strong reccomendation.

North End Treats, Natick: This is just a takeout sandwich shop, with pizza, and some phenomenal desserts and gelato. Had a nice sandwich and a whoopee pie there. Nothing says Italian food than a whoopee pie. Isn’t it “when the moon hits your eye like a big whoopie pie, that’s amore”?

Olive Garden-the usual pre-fab, pre-packaged, previously frozen Italian food from a boil-in-bag. Our most recent trip was slightly better, dimmed only by one waitress asking our second waiter “do we have any more packages of “Garlic herbed chicken?” Once again proving the theory that they serve the best of steam-table cuisine.

La Cantina, Framingham-an old mainstay in Framingham. They bottle their salad dressing which is available in Stop and Shops locally. It is a “three parm” type of place, but they make a wonderful polenta with chicken that is only available on Sundays and Tuesdays; you can’t get polenta everywhere You want to see the who’s who of Framingham (if there is such a thing), this is the place. Or Ken’s Steak House. 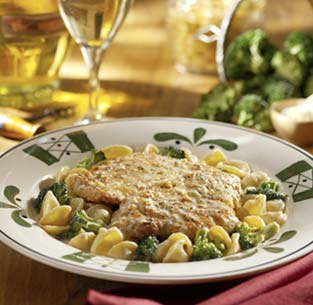 Paparazzi-the food is ok, but the price to value ratio is way off. Comes off as upscale Italian, with prices to match, but not the food. The hosts wear suits and try to appear important…comes off as self-important and pretentious. Had a private event there last year, and it was pleasant, but very expensive. There’s something about this place that is a little off...almost a “Stepford” restaurant. There are a number of them in the Metro-Boston area, but I’m not rushing over.

The Chateau-With locations all around eastern Massachusetts, they claim to have invented the toasted ravioli. Nothing says heart-healthy like deep fried ravioli and chicken Parmesan. The food isn’t bad, and they have a very traditional menu. I want to like it there, but they do serve some pre-packaged food. When we asked about the ingredients in an item, they said they had thrown the package away. Had a slice of their pizza, and surprisingly, it was pretty good. Most of the Chateau locations are more traditional red-sauce type places, but their Stoughton location, operating under the family name “Nocera’s”, is more Northern Italian and frankly, more enjoyable.

Bertucci’s-When people talk about their favorite Italian restaurants, inevitably, the talk turns to rolls or bread. You can always gauge the quality of a meal with the care a place takes when selecting and serving the first course…Bertucci’s made their bones off this theory, by dropping fresh baked hot brick-oven rolls and butter onto the table right at your arrival. These sublime doughy pillows from heaven suggested a hint of wood smoke, with a crusty exterior and a hot, fluffy interior. It was like a party in your mouth…but, all good things must come to an end. Alas, they’ve gone away from “brick oven” and now their rolls are just common fare, baked in an “Alto-Shaam” oven; no essence of wood smoke, no darkened crusty exterior…just a pedestrian “Sysco” style roll you can get anywhere. I hear it’s about labor and food prep costs. I say that when a restaurant turns away from its signature product or method of cooking, the end can’t be far away.

Speaking of bread, one last comment on that topic. As I said on the air, Italian restaurants and bread go together. Nothing says “you’re in for a good meal” than a decent bread course. Thankfully, most places have changes to a fresh-baked bread product. Bella Costa had particularly excellent bread to start us off. The Olive Garden is known for their breadsticks which I think have declined in quality over the years. As I mentioned, Bertucci’s has gone away from the brick-oven rolls. Paparazzi serves hard, cracker-like breadsticks…a very puzzling item in their quest to be a Stepford restaurant. My advice, if an Italian restaurant serves you a cracker at the outset, run, don’t walk, out the door.

You’ve been great…enjoy the overrated Andrea Bocelli…
Posted by Eric Weinstein at 11:17 PM

My bf and I were just discussing the decrease in quality at Bertucci's over the years. I assume since they were bought out and became more of a chain. The ricotta was changed and now the rolls . . and those pre-fab chicken strips. Yuck