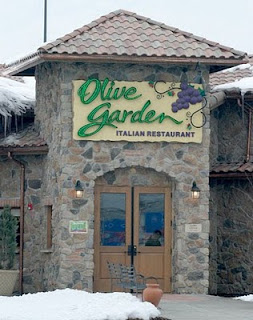 Just a little taste of the Palate before I go on Jordan's show tonight. This is essentially a repost of a posting from July 2007...I ate there again on my pasta parade, and it was only slightly better. An update is forthcoming, but for now...

Sometimes a meal is just so bad, so utterly awful, from beginning to end, that you feel compelled to complain, at the highest level. Sometimes you have to go all the way up the “food chain.” What follows below, is just one of those occasions. While the name of the restaurant remains anonymous, I think you all can infer where this was. Why I ever ate there to begin with is still a mystery. We haven’t been back.

“Dear Sir or Madam: I feel compelled to write you about what could be the singularly worst meal I have ever had at one of your restaurants. In fact, I have never had a good meal at your Framingham location, and I have reached the end of my rope when it comes to giving this location any more chances.

My wife and I went to the Framingham location last evening and were seated promptly. Upon the arrival of our waitress, we gave her our drink order, which did not come out right; that was the beginning of a total breakdown of this meal.

My wife has a severe allergy to dairy products, shellfish and peanuts; when she orders, she carefully details her allergies. She ordered the Chicken Marsala after being told by the waitress, who was resolute, that it was dairy free. We also asked for breadsticks without butter, and salad without cheese, with oil and vinegar dressing; the waitress assured us that it would not be a problem. I ordered Chicken with Broccoli and pasta. Within two minutes, having now been in the restaurant no more than seven minutes, our meals were on the table in front of us; yet we still have not seen the salad or breadsticks! I told the server, who was not our waitress, that I would like to see our waitress and get the salad and breadsticks. I know that you need to turn over the tables, but can I have 15 minutes for dinner?

A moment later, a manager, "Rich", came over and asked if there was a problem. We merely explained that we wanted the salad and breadsticks prior to getting our meal, which we were not quite ready to eat. I told him that we merely wanted to speak with our waitress. He told us that our waitress was having a "personal moment" in the office and that things were not going well for her tonight; she would not be attending to our table-he would. So he took our meals away, and arranged for the proper salad and breadsticks to be brought over. When they arrived, he told us that they had run out of vinegar, and he only had oil, which he brought. What kind of restaurant runs out of a popular condiment? Alas, my wife enjoyed only a partial serving of salad, without dressing.

A few moments later, Rich came over and asked if my wife was "lactose intolerant." My wife responded that she has an extremely severe allergy to all dairy (she carries emergency medicine in her pocketbook), and he said that the Chicken Marsala had a lot of butter in the sauce already mixed in, so that she would have to order something else. In hindsight, it was a good thing that the manager intervened, since he probably prevented a trip to the hospital by telling us about the butter in the sauce, a fact to which the waitress seemed oblivious. That mistake could have had severe health ramifications for my wife, and the waitress would likely end up with a more severe “personal moment.”

While my wife was picking out something else, Rich decided to sit with us, and while doing so, the other wait staff brought over our meals. Rich sent them away, and had them "remake" mine and make my wife something different. Eventually, Rich left and brought over our food, and my wife's meal was fine, but mine at this point looked as if it had spent the past thirty minutes under a heat lamp, or in a microwave; it was certainly not "remade." The pasta was hardened and crusty at the edges, and the broccoli was shriveled and had darkened spots from overheating. When Rich asked if everything was okay, we told him no, but we were not asking for new food, because who knows what type of mess would come out of the kitchen. He apologized, and stressed that he hopes we will come back and give them another try. I assured him, and now you, that we will not rush back.

After having cleared our table, Rich came back over, and told us that he wanted to offer us a free desert as an apology for our experience. I was shocked! Apparently, we not only had to suffer through this mishap, but now were going to have to pay for the privilege! He brought the desert, and presented the check, which although did not charge us for the desert, did charge us for the rest of the meal! I guess along with poor service, I should expect poor customer relations as well. After all my experiences with this location, I assure you I expect nothing more.

Your new ad campaign says “when you’re here, you’re family.” If this is how you treat family, I prefer to be a stranger.

The Framingham location is a disgrace to your chain; I hope you address their problems.” With so many family restaurants in Framingham, you give people little reason to patronize you.
Posted by Eric Weinstein at 8:49 PM