Out of their zone...

The world is full of examples of tremendous failures when people go out of their “comfort zone”. Like Robert DeNiro doing comedy, or Rocky Balboa leaving Philly and going “Hollywood” after winning the belt from Apollo Creed, once you stray from your strengths, only bad things can happen. Take a look at “Analyze This” or Clubber Lang…so, too, with restaurants; when they change formats, or expand their menus, nothing good usually happens. Witness, O’Connell’s Pub in Framingham. 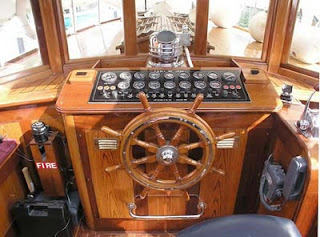 O’Connell’s is derived from “Lloyd’s Diner” here in Framingham; despite the Senior Palate’s appreciation of their breakfasts, it was a little lost on me. They only seemed to be open for about 15 minutes a week, and not always consecutive, but my father was a fan. Apparently, they sold out and decided to go “big time”; that is, if you consider “big time” an Irish-named, sports-themed pub…and sell out they did.

I could just leave you with this review: I left without eating. But so much more needs to be said …I wouldn’t be me if I didn’t...

Ok, so now that I got the positives out of the way, let me tell you about our experience.

After Burger Quest last year, I have pretty high expectations for a burger, and when you go to a “sports pub”, you expect a burger to be right in their comfort zone, or wheelhouse. But my experience here was exactly that of DeNiro in “Rocky and Bullwinkle”…O’Connell’s is way out of their comfort zone, and that’s too bad.

I order my burger “medium”. Not complicated, no special requests…just medium. Service issue number 1-when the waitress brought the food, she only brought out half the food, including mine. So while four people had their meals, 4 people didn’t. She did say she’d be “right back”, but I guess “right back” meant 15 minutes. She did come back a minute later (with a couple of meals, but not all), and by then, I had cut into my burger. I guess to the kitchen, “medium” means incinerated beyond recognition, or cooked to resemble a hockey puck.

When I pointed it out to the waitress, she scooped it up and said she would bring me another. About three minutes later, she appeared with another burger, but another odd observation-she still had not brought out the original burger for one of my dining companions. So here we were, everyone at the table with their meals (albeit not all cooked correctly), and me with my SECOND one, and someone just sitting there watching us. That’s only slightly uncomfortable. However, I would not wish this second burger on anyone.

Despite the nuclear cooking method used on the first burger, I think they employed the “hold a match in the near vicinity” method for the second. Despite what appeared to be a cooked exterior, the inside was raw. Not medium rare, not rare, but raw. If you put your finger into it (which I did), there was no bounce back, no resiliency, just soft, raw meat. I’ve had “steak tartare” that was cooked more. “Listeria” anyone? 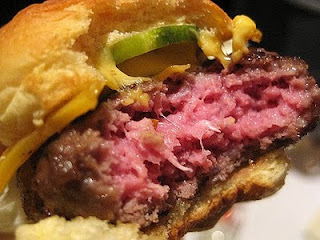 Full disclosure-this is a "composite" photo since the lighting wasn't good enough for my cell phone, I found a photo that accurately represents what my burger looked like.


When the waitress came back to check on me again, I showed her this burger. She agreed “that’s not medium” (you think?) and I told her that I wasn’t even sure they breathed on it heavily. She offered to bring me another one, but at this point, two strikes and you’re out. She persisted, to her credit, but frankly, if you’re a sports pub and you can’t cook a burger right, can you really expect anything to be right? I told her that I did not want her to bring anything else.

A few minutes later, she returned with a third burger, despite my protestations otherwise. When she came over, she said “he (meaning the cook, I guess) really wants you to have this. No charge (as if they would?). This will be just how you want it.” I told her I didn’t want it, and told her to take it away, but she insisted on leaving it. (As an aside, having no idea what is going on in the kitchen, but I can only imagine what the cook did to this burger; I would not have eaten that burger on a bet.) One of my dining companions decided that we needed to see how this burger was cooked. Of course, if it was cooked “medium”, all my dining companions would be taunting me to eat it, but I am a man of principles, and would not eat it no matter what; however, that decision was made for me when we cut it open, and it was as “undone” as the second burger. Whoever is working the grill just doesn’t understand the concept of how to cook food. Not a good thing when you work in a restaurant.

Having worked at my father’s diner, there is one concept that you can’t get away from-quality and consistency. If you’re not consistent in giving someone a quality product, there is no reason for him or her to come back. No one wants to go to a place that can’t get basics right, and certainly don’t want to go somewhere where it’s a crapshoot for each meal (in this case, emphasis on “crap”). Besides my meal, other dining companions noted that things were inconsistent from plate to plate. I had fries that looked well cooked and crispy (even though I didn’t order them-I ordered cole slaw), but my friend next to me had the same fries, but they looked soggy and pasty. This was true from plate to plate on the table. How does that happen?

Lastly, O’Connell’s calls itself “family friendly”-two observations about this. First, they are a “sports pub”, which by its very terms, means “bar”, and with “bar”, comes an element that’s fine for me, but not for kids. Add Keno to the mix, including a Keno screen in the dining room, and it’s not really as family friendly as the local “house of correction”.

Second, Junior Palate had to use the restroom, and he came back chuckling. I asked him why, and he said that the bathroom was disgusting (as most in barrooms are), but there was a funny poster. As it just so happened, I needed to use the men’s room. He was right-the bathroom was nasty, and the poster was funny, but totally inappropriate for a “family friendly” restaurant. While I chuckled when I saw it, and still do, rather than send a family-friendly message, it’s more about how to “make” a family. 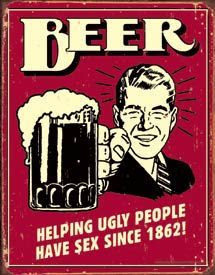 I always hope that these one-off, local places will be great and survive, and we all know, the MetroWest doesn’t really need another chain-style place. But given my experience at “O’Connell’s”, I’d rather eat the pre-fabricated pretend food at Ruby Tuesday’s across the street, and that’s saying something!

O’Connell’s…until they get back to, or find, their comfort zone, I’ll be staying away, and I have a feeling the other people with me might not be back anytime soon either. Eat at your own risk.

Love the Celtic Women, not burgers.

as u said , i am or was a big fan of lloyds diner for brkfst -- the only other place that makes a brkfst that satisfies me is right here in my kitchen ....
senior

If my burger came back still mooing not once but twice I would not be a happy diner. Gross!!

Well, they've got history against them with that location alone.

But bad service and incompetently cooked food? See ya!

One pub-style place in the Ham that has withstood the test of time is Nobscot's Cafe` - nice people, good food, a real neighborhood vibe, big on sporting events, and live music, it doesn't get any better.

Yep, it will be wall to wall this Wednesday on St. Patty's Day, but I'll walk down there from my Nobscot home and shoehorn myself in for a Guinness and stand there listening to the Belfast Cowboys belt out the old Irish favorites. One of my annual traditions, and I'm Italian!

Why go to a new place and try something as typical as a burger? When and if you decide to ever try out the place again, you need to have steak tips. Also, if you ever did grace Lloyd's you would know that the owner makes some of the best steak tips around and that is where you were misguided. A burger is standard and typical, but his steak tips are tender and juicy, whether they are cooked at a rare temperature or as you like to put it "hockey puck texture." Try the place again and have steak tips.