In the spirit of comfort foods, a few of the charter subscribers and I have a sick obsession with the “Wellington”. It started with a knish (a Jewish version of a mini beef wellington), then the stuffed knish (using the knish as the “bread” for your sandwich), and has now grown into an outright fetish.

As I embarked on the comfort food quest, I harkened back to my youth and the traditional foods served at most family events. A beef or potato knish was always front and center on the appetizer tray, so as I expanded my palate, and after tasting a beef wellington, I knew that a better knish could be made. For years, this knish-wish would lie dormant, but after receiving an email from the Crown Supermarket in Hartford, the “Delington” was born. This would be an opportunity to achieve stuffed dough enlightenment (in my mind, but not likely in my colon). The least that would happen would be an opportunity to eat some puff pastry. 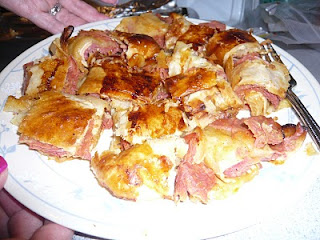 The “Delington” entered this world on New Year’s Eve 2010. The first attempt was a sheet of puff pastry laid out, with some ketchup and mustard slathered on, then layers of corned beef, turkey and salami, with the mustard and ketchup mixture slathered between each layer. Then we rolled it and baked it for about a half hour. We served it in slices, and it wasn’t bad, not bad at all. 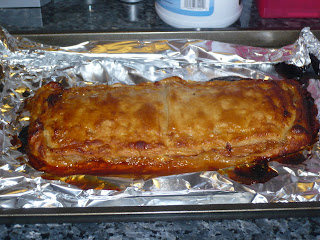 Trying to improve, the very next night we embarked on an attempt to do better. This time, we laid out the puff pastry, mixed bbq sauce and brown mustard, with a little kick, then layered on the corned beef, then turkey, and then pastrami. We believed that the latent sweetness of the puff pastry and the bbq sauce needed to be “cut” with the spicier brown mustard and the peppery pastrami. Instead of rolling it (as a “Swiss Deli Roll”) we just layered another sheet of pastry over the top, then baked it for about a half hour. This took the “Delington” from being pretty good, to sublime. 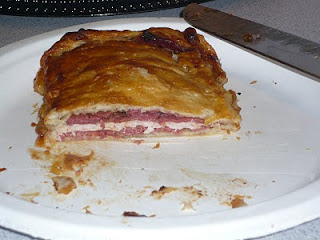 This may make its way into the menu for our holiday dinners going forward.

Stay hungry my friends.
Posted by Eric Weinstein at 9:50 PM