Much ado about deli...

Without further ado (or much ado about nothing…), let’s review some of the highs, and lows, of the local deli delights… 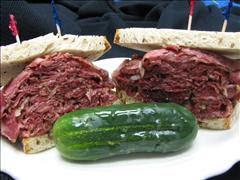 Filling the bill (and the belly) of my traditional deli experiences would be Rein’s in Vernon, CT, Zaftig’s in Brookline and the S & S Restaurant in Inman Square in Cambridge. Kugel’s in Framingham is a close, but not quite, wannabe, and Joan & Ed’s is like a “Stepford” deli-has some fake essence of the real thing, but not quite real at all.

As I have said in prior posts, my delis need to have big sandwiches, great pickles, traditional “Jewish-style” delicacies (in other words, some foods normal people wouldn’t be caught dead eating, although many of these food will kill you) and some sweaty guy in the back cutting some smoked meat. Great delis will be very popular, and engender a dedicated following. Honestly, there aren’t that many here to choose from, but here goes…from the bottom:

Joan and Ed’s Deli, Natick, MA-I gotta admit, like a dog whistle, this is lost on me. I have never enjoyed one thing I’ve eaten there. I find it passable, but their location (at the former Shopper’s World in Framingham) went from bad to worse when they moved across to the strip plaza at Sherwood Plaza. While they have a deli case up front for take out and “per pound” deli, there is something not quite right about it. I find the affect of the staff to be off-putting, and their prices surprisingly high for food whose quality is somewhat questionable. I know they have followers, but I’m not one, though they do a big “shiva” business. On a positive note, they give you the requisite half-sour pickles and a small container of cole slaw at the time of seating. Just don’t dare ask for more… 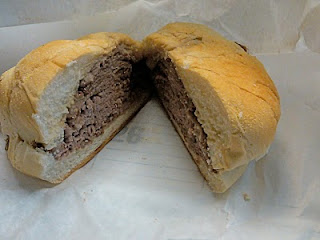 Kugels, Framingham, MA-Kugels has been a favored breakfast place among the locals and older crowd. They have switched owners a few times, but the menu seems to stay the same. They have the usual standards, both for breakfast and lunch. I have to admit I do like a good breakfast, and the few times I’ve eaten there, it’s been good enough. Problematically, it’s very small, and in an obscure location (in Trolley Square in Framingham Center). The tables are squeezed together tightly, and I could smell the guy at the next table better than I could smell my food. Though the menu says “deli”, the environment is more “sandwich shop”. That being said, I went for lunch yesterday and had a hot brisket sandwich, with extra gravy on the side for dipping. Though the brisket was sliced thinner than I’d like, it was tasty. My dining companion Sterling got a fresh-roasted turkey sandwich, which was too large for her to finish, but was fresh and tasty as well. Kugels is about half way to being a deli. The menu is right, but not the location or décor. 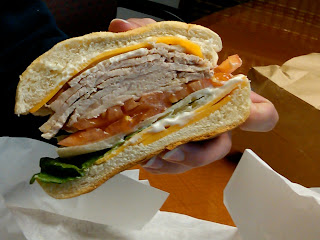 S & S Restaurant, Cambridge, MA-The S & S is pretty close to what people imagine for a deli, except without the hanging meat, guys with filthy aprons, or cutesy deli décor. It’s a big floor plan, with multiple rooms, and really long lines. You can always tell a popular deli by people’s willingness to wait for the food-I am usually unwilling. I admit that I was only there for a breakfast on a Sunday morning, but it was packed with all sorts of people ordering all the classic deli breakfasts…smoked fish, bagels, eggs. The lunch menu looks huge, with all the standards…if you’re in Cambridge, this could be a place to eat.

Rein’s Deli, Vernon, CT-I always think that you have to beware of places that are so well known. If you have ever driven I-84 from Boston to NY, you know that passing through the Nutmeg State (is that the best CT could do?) means passing Rein’s in Vernon, CT. I admit that not only did I pass it, I did so with glee, not being pulled in by its siren song of smoked meats. I remember going there once when I was a kid, and my parents being shocked at the prices. Now as an adult, I passed it for years, never having the desire to stop. That changed about a year ago, when I was convinced by some traveling companions to pull in for a sandwich.

Rein’s touts itself as a New York style deli. It’s at the end of a strip plaza, and when you walk in, there is usually a huge line, but in true NY fashion, the wait staff hurries you out and pushes people through. Though the lines are long, the wait is not, but be forewarned, you’ll be shown the door as soon as your plate is cleared.

Rein’s menu is typical deli, but they have the décor and good to back it up. I think on my most recent trip there, they may have switched to all Hebrew National meats, except the smoked ham, of course. Their menu is huge, and you can get sandwiches in two sizes. I like a good Reuben and Rachel (cole slaw instead of sour kraut), and Rein’s makes a pretty decent one. Their fries, as touted by my friend Judy, are really good, and since Rein’s is on the direct route between Boston and NY City, you’re bound to see someone you know. The Fung Wah bus won’t be stopping here, but probably a day trip from Hebrew Senior Life.

Zaftig’s, Brookline, MA-this is an updated version of an old-fashioned deli. The menu is replete with the usual suspects…the knishes, the kishke, the kugel…but filled with so much more. They serve breakfast anytime (better than Bickford’s), and along with the basic omelets, they have some funky offerings such as a Mackintosh Apple and Vermont Cheddar omelet. I had a corned beef Rachel (light rye, corned beef, cole slaw and Russian dressing, no cheese, toasted). The ambiance is right on, the menu covers all the bases, and then some, and the food is good. Your daddy’s deli, this ain’t, and I like it. Apparently I like my delis like my women and Zaftig’s in Brookline was the best of the bunch.

Honorable mention has to go to the best sandwich shop hoping to be a deli-Sam LaGrassa’s in the Downtown Crossing area of Boston. I saw LaGrassa’s on “Diners, Drive-Ins and Dives” on the Food Network, and met up with charter subscriber Ben there for lunch this past week. LaGrassa’s is a small place with some individual and communal tables. The have a huge sandwich menu, and everything is made right out in the open. The table of steamed smoked meats and cold cuts looks good, and they have prompt and efficient service. Ben and I got the same thing-the pastrami/corned beef combo with Russian dressing and cole slaw. A non-toasted Rachel, with double the fat content. Quite delicious, though I didn’t feel that well after eating. I wonder if it was my body’s way of saying “enough is enough”. 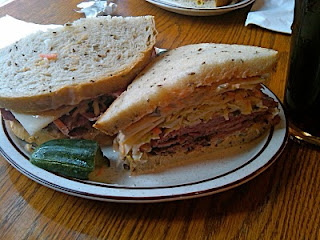 LaGrassa’s had some nice sandwiches, and the stuff other people were eating also looked good, but without the traditional deli items, it isn’t really a deli. I would give it a strong recommendation for a sandwich shop, but for a “deli”, not so much.

While I have enjoyed this trip around the knish for you, I think I need to follow my mother, and doctor’s advice-next food quest, salads!!!
Posted by Eric Weinstein at 6:30 PM