I feel a little like the accountants at Price Waterhouse…I have reviewed the nominations and tallied the votes. The only one who holds the key to winner is I…

Let me take a moment to look back on this journey. I am pleased that I was able to embark on this for you, my readers. After dozens of chicken Peking Raviolis, chicken wings, teriyaki sticks and bowls of Hot and Sour Soup…decisions have been made. Without further ado…

SG is excellent, if you like traditional Sichuan (as they spell it) cuisine. This means that when you eat there, bring your asbestos-covered tongue. “Sichuan” is apparently means “let’s torture the non-Asian diners with the hottest food known to mankind.” I love it, as do the Palateers. Mrs. Palate stopped eating there a few years ago, when they brought her food that contained every possible allergen, even thought she was clear about what she could not consume. Junior Palate and I kept eating there, and recently Mrs. Palate and the Junior Palette joined back in. Without a doubt, their “Kung-Pao Chicken” is the best I’ve had since the “China Mall” back during law school, and their “Hot and Spicy Fried Chicken Wings” are the best chicken wings in the area. Rounding out our meal is usually Chicken and Chinese Eggplant (not spicy) and “Shredded Chicken with Smoked Cayenne Pepper” (uhhh…very spicy!) If you want them to modify the spice, they’ll do it, but it will still have some. If you fail to mention that you want them to adjust it at all, be forewarned. Eat at your own risk. Hurts so bad.

Now, the winner of the Golden Chopstick…the apex of Wok About 2009…no surprises here…Royal East in Cambridge.

We’ve been dining with friends at Royal East for about 6 years or so. Our first introduction to RE came at the invitation of a friend who was celebrating a birthday in the function room. The menu was done in the style of a traditional Chinese banquet. Now sure, some things served that night were things I was unfamiliar with…fish-head soup, golden fried whole chickens, with their heads and feet attached (and fried) and other various oddities….however, going there many times subsequent, I was introduced to the more sublime and subtle aspects of true Cantonese style cuisine.

Many people ask how to get their kids to eat more vegetables…I say: bring them to Royal East. Since we’ve been dining there, my kids have become fans of pea tendrils, yellow chives, baby bok choy and Chinese eggplant. Our usual meal there consists of soup, then an appetizer course of chicken dumplings (think Peking Ravioli, but with ground chicken instead of pork) and chicken with yellow chives (served in a pancake, like moo-shi), then main courses of Beef Chow-Foon with onion and green peppers, sliced chicken with ginger and scallion and sizzling chicken hot-pot, which comes to your table in a sizzling cast-iron pot with all sort of mysterious, but delicious ingredients.

Of course, for you who delight in the pleasure of bottom-dwelling fish, we have been at a table with Shrimp in Garlic Butter, Lobster 3 Ways (I’ll leave that to your imagination) and a Tamale omelet (yes, lobster liver and eggs!!!) While there, we’ve also been offered Jellyfish and Duck-web. I passed.

One of the nice things about RE is the ability of the staff to make whatever you want, and an owner who comes to the table and can explain what is particularly fresh and what to avoid. Eating there so frequently, we’ve gotten an education on everything from which vegetables can be served with each other and which assortments may cause the world to end, to fish-maw (sp?) soup and why non-Asian people won’t eat that! 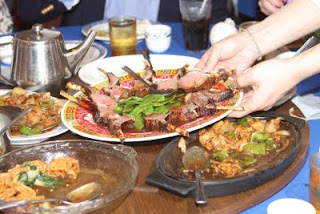 We have enjoyed the food at RE so much that we recently hosted the Junior Palate’s kids’ bar mitzvah party. As you can see from these photos, it was a grand time. The owner was kind enough to close the entire restaurant for the day and laid out a buffet for the kids.


If you like seafood, be forewarned…we have been told by Otto, the owner, that there is a substantial difference in the quality of seafood served to a table if the fish has been dead for a while, or if it has been “fresh-killed.” Obviously, fresh-killed is better. At RE, when you see a waiter with a big net at the fish tank at the front entrance, you know someone just ordered the sea bass! 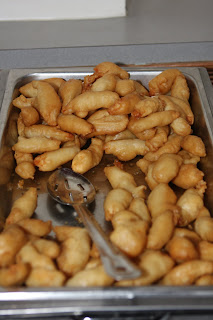 The bottom line on Royal East-if you like your Asian food fresh, your vegetables crisp, and food prepared with the proper balance of seasonings to enhance the flavor of the meat or vegetables, not cover them up, then in my book, RE is on the top of the Great Wall!

I must admit, a few weeks ago, I thought I had consumed enough Chinese food for the rest of my days…I told Mrs. Palate that we needed a break…that break lasted 4 days. We’ve come a long way since the mysterious brown sauce, rolls and butter and stainless bowls with lids. Now I can’t give it up. While a challenge, it was one I gladly undertook for myself, and for you, the dining public. I hope you have enjoyed reading about these exploits and restaurants and hope you choose to patronize a few.

You’ve been great…next up for me, a challenge against Takeru Kobayashi
Posted by Eric Weinstein at 9:40 PM

ooo... i am an eggplant super fan! sigh. i want the spicy eggplant sooooo badly right now. with rice.

Here I bought a sauce pack so as to skip all the seasonings! and i will try this friday after work.
http://yummiexpress.freetzi.com