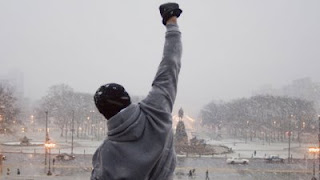 I agree, I love the movie Rocky and my husband does too. He worked it into our wedding vows. It's definitely a feel good movie. Another movie that has stuck with me is Cinderella Man. I'm not a big Russell Crowe fan, but this movie also hits at the heart strings and has the underdog factor. If you haven't seen it you should rent it and the almost teenage palater might like it too.

Shawshank - when are you watching it, million dollar baby

So weird that you bring up this movie! My husband and I recently watched this with out 13 year old son. We hadn't watched it in years and of course he's never seen it. The movie really conveyed the message that no matter how many people try to hold you back, push you down, tell you you can't......YOU CAN. This is something we have always told him and this movie is a perfect example of that. If you work hard, believe in yourself, get up when you are knocked down, you can acheive your dreams.